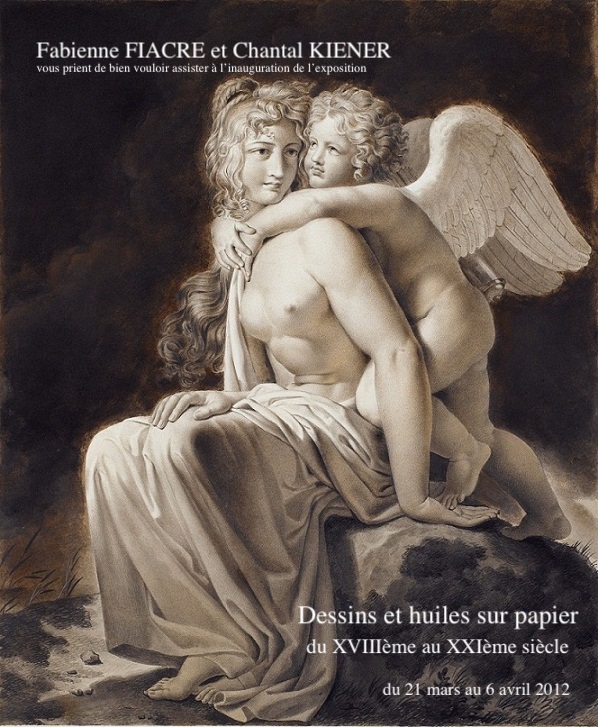 The 18th century is represented by two beautiful studies of plants in sanguine by Jean-Baptiste Huet (1745 - 1811) drawn after nature, similar to those in the collections of the Louvre Museum. They frame a Feminine Head by François Boucher (1703 - 1770), from the Marmontel collection, and a gouache by Pierre-Antoine Baudouin (1723 - 1769), The Evening at the Tuileries Gardens, which belonged to the painter Jean-Baptiste Siméon Chardin.

The 19th century revolves around a rare drawing by a student of David, Hilaire Périé de Sénovert (1780 - 1833), who belongs to a dissident group within his studio, the "Primitives" or "Barbus", who advocate a return to archaic Greek rather than Roman Antiquity. The artist represents the moment when Cupid falls in love with Psyche, a theme that enjoyed great fortune in the neo-classical era, illustrated by Prud'hon, Canova or Baron Gerard, also a pupil of David. A School Interior of Little Orphan Girls by François Bonvin (1817 -1887), a subject the artist likes and which makes him famous at the Salon of 1850, an Underwood by Jean-Achille Bénouville (1815 - 1891), a very refined drawing in ink and black wash with white gouache highlights on blue paper, and a beautiful study in three pencils representing Paul Helleu’s (1859 - 1927) favourite subject, his wife Alice, complete this set. Two rare landscapes, oils on paper of the "great Rosa", (Rosa Bonheur 1822 - 1899), coming from her studio sale in 1900, in their original frames, testify to the quality of painting of this artist now somewhat forgotten, one who was in her time the most famous woman painter of the nineteenth century. Around an exceptional pastel by Simon Bussy (1870 - 1954) will be gathered a set of animal studies from different periods, charming subjects by Jean-Jacques de Boissieu (1736 - 1818), Anne-Xavier Leprince (1799 - 1826), Léonard Foujita (1886 - 1968), and Victor Koulbak (born in Moscow in 1946), the only contemporary artist to be exhibited.

From the 20th century, we present studies by Jean Dupas (1882 - 1954) for the ocean liner Normandie, an astonishing petrol painting on cardboard by Jean-Emile Laboureur (1877 - 1943), Religious Women at the Seaside, circa 1901-1903, a Young Sleeping Girl by Alix Aymé (1894 -1989), interesting synthesis of European and Asian styles of this student of Maurice Denis, and a more classical study by Christian Bérard (1902 - 1949) representing Hedwige Feuillère’s and Sylvia Monfort’s costumes for the film L'Aigle à deux Têtes by Jean Cocteau (1946).