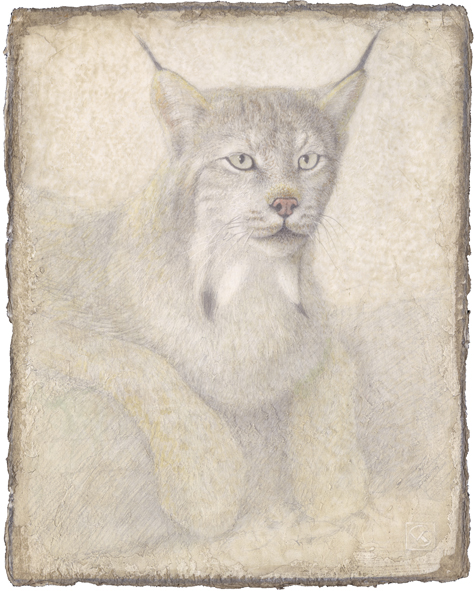 Victor Koulbak, a Russian national, now lives and works in Malta. He draws with silver point, with delicate watercolor highlights, in a technique close to that of the artists of the 15th century, on papers that he prepares himself. After an apprenticeship in his youth of four years at the Academy of Fine Arts of the USSR in Moscow, where he is taught the accuracy of rendering, he completes his training by studying the Old masters and naturally turns to Leonardo da Vinci, Michelangelo, Dürer, Van Eyck, or Memling. Having left the USSR in 1975, he moved to Paris, where he exhibited successfully, as well as in Japan, Canada, Belgium, Italy and especially in the United States, in New York. Part of his work was presented in 2001 at the Musée de la Chasse et de la Nature in Paris. The National Museum of Fine Arts in Malta, where he now lives, paid tribute to him in 2002 and more recently in 2009. In France, the Fonds National d'Art Contemporain and in the United States, several American museums - notably the Museum of Fine Arts in Boston and the Johnson Museum of Art at Cornell University - have acquired his drawings. Johnson Museum of Art at Cornell University - have acquired his drawings.

Wild but familiar...
The sympathy of the artist for the animal world is translated by an objective vision, quasi-photographic in the rendering of textures, and by the search for the most accurate attitude of the animals he represents. The exact measure of the expression of their gaze gives them an incredible presence. Koulbak grants them thought. And his naturalism is reserve and poetry.